When I was dating quite a few years ago, I had been talking to someone both over the ‘net and on the phone – this was before Skype – for some time when he suggested that we meet up.

I agreed to go to Newcastle on the train to spend the weekend with him. This was about a 5 hour journey from where I lived in Kent, just south of London.

I suggested that we meet at the station bar when I arrived so that we could have a chat and decide if we liked each other enough to spend some time together. I got his address and told my friend where I was going so that if anything went wrong someone knew where I was. She also agreed to ring me during the weekend to check that I was ok and see how things were going.

To be honest I did not find him that attractive in the photo he sent me but I figured that a lot of men don’t photograph well, it’s personality that counts and since he seemed like a very nice man I would give it a try.

It was a horrible journey. Due to bad storms which had left a lot of the country flooded, the trains were being adversely effected. They were being cancelled and running late all over the rail network. In the end I managed to get to Newcastle after quite a difficult journey. The guy I was due to meet was there to meet me. Unfortunately despite his new clothes that he had told me he had bought especially and despite his excitement at meeting me, I realised straightaway that I did not fancy him. He was older and much more ‘padded’ than the photo he sent me. And to be honest the photograph he had sent me was quite flattering.

We went for a drink in the station bar and were having a chat when I noticed on the train timetable screen that there was train back to London in 25 minutes. So I told him that I could not go through with the weekend although I was happy to answer any questions that he had. I felt terrible for doing this but I just knew that it would have been a mistake to stay. So I got back on the train and looked wistfully out of the window and reflected on what might have been.

I should say at this point that this was one of those moments in my life when I just knew that I looked ‘hot’ and felt sad that the trip had been such a waste of time. I was on seat with another seat beside me and two seats opposite me with a table in between. I kept on staring out of the window, not quite believing what had just happened. Then in the corner of my eye I could see a man looking at me. He was in the seat behind the seat directly in front of me and was looking at me through the gap.

At first I thought I was imagining it since interest like that from a man does not usually happen to me. After a while it was absolutely clear that he was looking at me quite intently. But he did not look happy. He looked completely miserable. 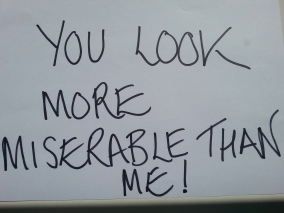 To be honest it was a bit disconcerting so I wondered what to do about this. Then an idea came to me and I wrote on an A4 sheet of paper ‘You look more miserable than me’ and held it up to him. He nodded.

Then sitting there I wondered why he was miserable. So I wrote on another piece of paper ‘Women?’. He said ‘I wish’.

After thinking for a while I then wrote on my pad ‘Money?’ and held it up to him. He said ‘no’.

Quite enjoying this little game I then wrote ‘Health?’ and held it up to him and he said ‘No, trains’.

Then the guy directly opposite said to me ‘does he want to change seats with me?’. I said ‘no it’s fine thanks’. But after a few more minutes of eye contact, I went to talk to the guy in the seat behind him. I told him my ‘tale of woe’ and he said ‘You should have tried Leeds’, which made me laugh.

Then he told me his story. It turned out that because of the flooding he would have to make three more train connections to get home that night and this was what was making him miserable. Of course after not very long he had to get off the train to make the first of his connections but he had amused me and it felt like fate that we had met that day so I thought why not give him my card. Of course I never heard from him but our chat did cheer me up and made me feel much better about myself.

Then I went back to my original seat and to thoughtfully staring out of the window whilst occasionally trying to read the book I had bought with me. I then noticed out the corner of my eye that the guy directly opposite me, who had previously offered to change seats was now also looking at me – and no it was not my imagination!

We started chatting and to be honest I had hardly noticed him since I was still preoccupied with my thoughts. And then he got up and in a very deliberate manner took his cardigan off and I thought ‘oh hello’. Under that unflattering garment was clearly a very attractive man.

We got talking about things, as you do, and it turned out he was he was an orthopaedic surgeon who was currently working in Milton Keynes who had gone up to Newcastle for an interview for a NHS Registrar job in the local hospital.

As we chatted he told me that he was a Palestinian orthopaedic surgeon who had trained in Slovakia and used to be a male model in order to support himself through his training. He was tall, dark and handsome and since his training had been funded by Russia he spoke Arabic, Slovakian, some Russian and near perfect English. I have a ‘weak spot’ for a man who can speak other languages!

Although I did not find out his name and whether he was married, he was stacking up to be my ideal man. Because the trains were running late and stopping and starting all over the place, the journey which would normally take 5 hours, took about 7. All this time we just sat and chatted. The chemistry between us was, at least on my side, palpable.

All the time we were chatting I was furiously trying to work out in my head how old he must be. Having worked in the NHS for much of my career I thought that as a Registrar he must be at least 20 years younger than me, probably married with small children or wanting to have children one day.

So dear reader I expect you are wondering what happened next?

Well the answer is nothing.

Having gone to meet one man and told the story of that episode to another man in his earshot and given that other man my card in his presence I just felt that to give him my card would look ridiculous.

So when we got off the train we walked silently together, hugged each other ‘goodbye’ and went our separate ways. I think he was expecting me to say something, give him my card or invite him for a coffee but I just thought it had been a very odd day and it would be better to leave it at that.

I often reflect on this episode fondly since it was a moment in time, which erased the memory of the abortive weekend visit and helped me to feel sexy and attractive again.

I do sometimes think about the Palestinian Orthopaedic Surgeon who used to be a male model and wonder if he ever got that job in Newcastle.

With thanks to Jo Grant, for permission to use her photographs

Please note that this article is Copyright and cannot be reproduced, stored, or transmitted in any way without prior permission of the author.

Like Loading...
« The Meetings – The Evolution of Love
Get that Job – How to impress at the interview »